Parts of the 1981 documentary The Decline of Western Civilization were filmed at “The Church”, a 1920’s-era Baptist house of worship in Hermosa Beach that eventually came to be a rehearsal/living space ($16 a month) for Black Flag. 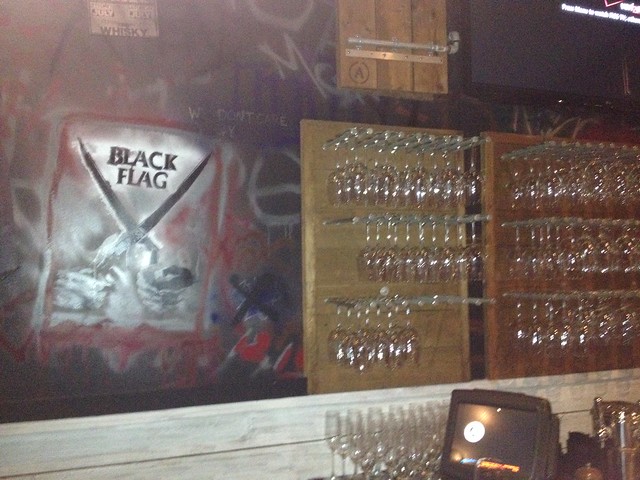 It was a bit of a trip, on my first visit to Los Angeles, to be sitting at an upscale eatery with “edgy” decor and to learn we were sitting in the very same “Church” so storied in hardcore lore. The food was good, and with shared plates the final tab was not so pricey. But I couldn’t shake the sense that the universe was trying to teach something to me. That I was sitting with some folks associated with ‘Edupunk’ may or may not have added some metaphoric resonances. I haven’t really thought that through… 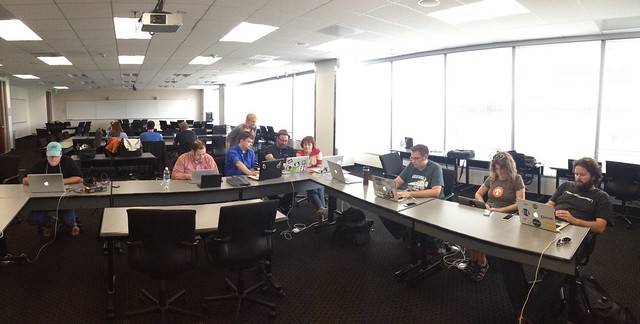 That surreal moment capped an inspiring weekend taking part in the Reclaim Your Domain LA Hackathon. I believe the event was prompted by the roll-out of Domain of One’s Own projects at University of Oklahoma and CSU Channel Islands, though the actual agenda was much broader, encompassing (among other things) a vision of “Reclaiming your Domain”, the POSSE-oriented platform Known, the Smallest Federated Wiki, APIs, GitHub, and the “containerization” model for deploying apps.

Normally, I might get to see and talk to some of these people at a conference, and engaging these topics would be limited to some scattered seminars and a few liberating moments connecting the dots over post-session beers. At this hackathon, the small number of highly-engaged participants, a lightly-structured agenda, and time to dig into these subjects in depth combined for one of the most intense and rewarding learning experiences I’ve had in some time. I loved how the group would break apart and re-convene fluidly, free to pursue individual or collective interests as the moment dictated. It was also extremely fun, set in a cool city, lots of laughter and some genuine party party energy in the evenings. I can’t begin to capture it all, but I will share a few bits, and then point to some more authoritative write-ups from other participants. 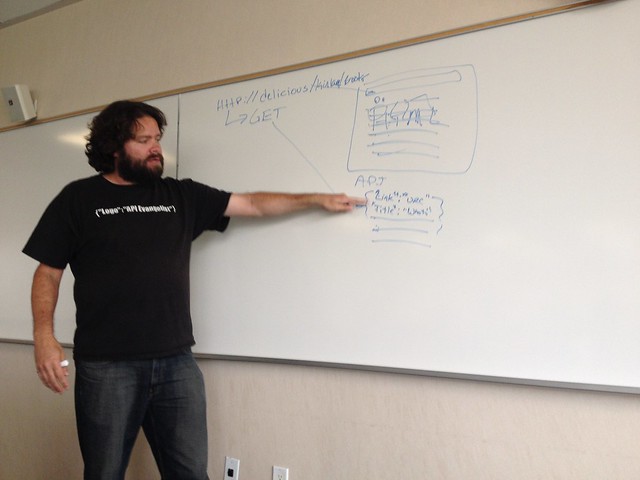 I really appreciated API Evangelist Kin Lane giving us an in-person run-through of API 101. I found this overview to be immensely useful, and if you haven’t heard Kin discuss this before, you can listen to it here:

This past week, I have been trying to to build on this learning, checking out things like what BYU and Berkeley are doing with APIs, and wondering how it might apply closer to home.

I also found Kin sharing how he is driving his own Reclaim process using Terms of Service; Didn’t Read to be illuminating. 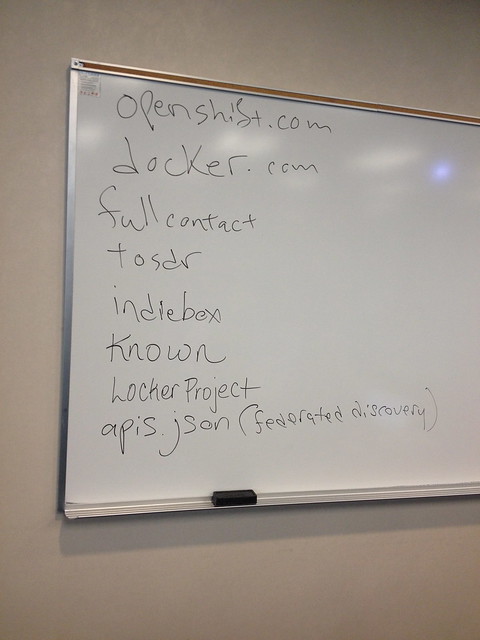 I’ve been intrigued by discussions concerning how things like AWS, Docker, OpenShift are shifting the software landscape, and wondering how something like UBC’s EduCloud might allow us to do some of these things while remaining compliant with our province’s FIPPA privacy legislation. So it was wonderful to dig into some of this stuff with some experts and other curious newbies to the model. I just wish I could have been more present during the discussions concerning GitHub — I got distracted trying to recover this site when it melted down. Abject.ca has either been hacked or has some major corruption somewhere. Nonetheless, I also managed to set up a new look for my site — whaddya think?

I really enjoyed being around and learning from every single attendee. I felt part of a very dynamic, supportive exploratory cohort. But special thanks to our wonderful LA hosts: Mikhail Gershovich, Michael Berman, Chris Mattia, Rolin Moe, Linda Polin, Kin Lane and Audrey Watters. We couldn’t have done this is in a better environment, and I hope the talk of another Hackathon in LA this winter comes to pass.

A few write-ups from other participants:

Much of the framing of “Reclaim Your Domain” works this way: it’s becoming a bridge between the “owning your own domain” as forwarded by the UMW Domains initiative — something that is frequently talked about in terms of “content” (education-related or otherwise) and “digital identity” — and larger questions and concerns about “who owns your data.”

…Of course, you could argue that the education system is already incredibly interested in “templating” students as well as “templating” knowledge. We see this in graduation requirements, course requirements, essay requirements, disciplinary requirements, tenure requirements, and so on. Many education technologies loyally reinscribe these templates into the digital world. The LMS is perhaps the perfect example. The call for more adaptive technologies (often connected to textbook, assessment, and LMS technologies), reliant on they are on data models and algorithms, represents the next wave of tools that produce — yes, produce — the “templated learner.” (A “templated learner” that is shaped by and relies on corporate infrastructure, not on public infrastructure, mind you.)

APIs are central to everything about #Reclaim. It is how users will take control over their digital self, driving solutions like Known. With #Reclaim being born, and propagated via universities, the API stakes are raised across higher education. Universities need to adopt an API way of life, to drive all aspects of campus operations, but also to expose all students to the concept of APIs, making part of the university experience–teaching students to #Reclaim their own course schedule, student data, and other portfolio, and other aspects of the campus experience. Universities are ground zero, when it comes to exposing the next generation of corporate employees, government workers, and #Reclaim informed citizens–we have a lot of work to do to get institutions up to speed.

I worked for a while at a Services-Oriented Architecture obsessed company as an interface programmer (dynamically building indexes to historical newspaper archives using Javascript and Perl off of API-returned XML). I’m newer to GitHub, but have submitted a couple pull requests through it already. So I didn’t really need Kin’s presentation on APIs or GitHub. But I sat and watched it because I wanted to learn how he did presentations. And the thing I constantly forget? Keep it simple. People aren’t offended getting a bit of education about what they already know, and the people for whom it’s new need you to take smaller steps. As an example, Kin took the time to show how JSON can be styled into most anything. On the other hand, I’ve been running around calling SFW a Universal JSON Canvas without realizing people don’t understand why delivering JSON is radically different (and more empowering) than delivering HTML (or worse, HTML + site chrome).

Reclaim Hosting, which was created by Jim Groom and Tim Owens, supports Known (as well as Elgg). It was set up to provide educators and institutions with an easy way to offer their students domains and web hosting that they own and control.

We’re excited to be in the mix, both in terms of the services at UMW and elsewhere, but also in the wider conversation. Schools and universities are in a perfect position to talk about data ownership, so it’s inspiring to see them doing just that. While Jim Groom and the other members of the Reclaim Your Domain community are ahead of the curve, I expect many others to follow. Their work provides an obvious benefit to both students and faculty at the institutions that adopt it, in a way that previous eportfolio initiatives didn’t necessarily achieve. (Elgg emerged from work Dave Tosh and I were doing on electronic portfolios in education.)

I still feel quite raw and unsure in these spaces. But it’s exhilarating to be learning new things and gratifying to be on a journey with such gifted and committed people.