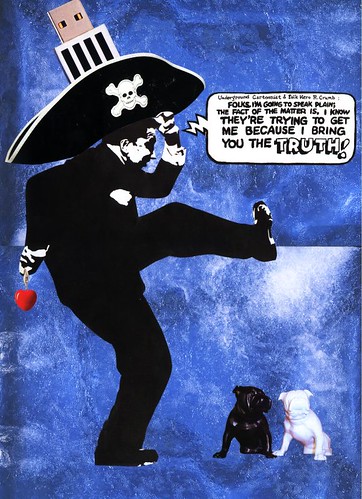 A crony sent me notice of this talk happening next week here at UBC:

Ashamed to admit I had not read the work of Adrian Johns before today. But the prospect of seeing this talk next week was enough to send me scurrying like a rat to the UBC Law Library to secure a copy of his latest book without paying for it. Working at a university, and the access to an academic library system that comes with it, has its privileges. I had not realized what a privilege this was, nor the penalties for violating its exclusivity, until recently. I digress…

I can only pray that I am safe within the cozy confines of Canadian “fair dealing” when I quote a couple paragraphs from the blurb for Piracy:

Piracy explores the intellectual property wars from the advent of print culture in the fifteenth century to the reign of the Internet in the twenty-first. Written with a historian’s flair for narrative and sparkling detail, the book swarms throughout with characters of genius, principle, cunning, and outright criminal intent: in the wars over piracy, it is the victims—from Charles Dickens to Bob Dylan—who have always been the best known, but the principal players—the pirates themselves—have long languished in obscurity, and it is their stories especially that Johns brings to life in these vivid pages.

Brimming with broader implications for today’s debates over open access, fair use, free culture, and the like, Johns’s book ultimately argues that piracy has always stood at the center of our attempts to reconcile creativity and commerce—and that piracy has been an engine of social, technological, and intellectual innovations as often as it has been their adversary. From Cervantes to Sonny Bono, from Maria Callas to Microsoft, from Grub Street to Google, no chapter in the story of piracy evades Johns’s graceful analysis in what will be the definitive history of the subject for years to come.

Boy howdy! That looks like dang fine readin’! [I hope that qualifies as “criticism and/or review”, not sure how much more I can offer before I read the book.]

I had intended to get a start on Piracy while commuting to the bar home, but demons of digital serendipity had other plans for me. The following podcast, from Benjamen Walker happened to be at the top of my rotation:

October 3, 2011: PIRATES
The ancients said that the Pirate was the enemy of all mankind. Mzwakhe Mbuli wants to Shoot the Pirate, and Olga Sezneva says Russia is doing its best (in its own way) to solve the problem as well. We hear from a real Somali Pirate who will be in an upcoming documentary made by David Cálek. Adrian Johns tells us about the birth of the Pirate listener and the death of Pirate Radio. PLUS Tim Kreider on Errol Flynn!

I came for the Adrian Johns, I stayed for the Somali Pirates! Bonus points for any commenters who care to draw out connections between a Russian regime that fines Deep Purple for playing its own songs (I’d add a joke about ‘musical justice’, but I like Deep Purple), and the publishing system that is propped up by freedom-loving western academics everywhere. (Almost everywhere.) WARNING: the use of the word “mafia” in any context herein will be deemed slanderous and dangerous to my kneecaps forthwith, and banished accordingly.

Hat-tip to Alec Dawson for letting me know about Dr. Johns’ talk next week. I feel compelled to add that I am one of the wooden-headed idealist cronies pilloried in this post of his. Which reminds me that a revision of my initial impressions of Occupy Wall Street is overdue… And that I really need to bash out my conflicted thoughts on the utility of public protest in general…. Try to contain your anticipation.