Many forms of violence and hardship have befallen Syria’s people as the country’s civil war has escalated this year. But the Syrian government’s attack here on Dec. 12 pointed to one of the war’s irrefutable patterns: the deliberate targeting of civilians by President Bashar al-Assad’s military, in this case with a weapon that is impossible to use precisely.

Syrians on both sides in this fight have suffered from the bloodshed and sectarian furies given dark license by the war. The victims of the cluster bomb attacks describe the tactic as collective punishment, a mass reprisal against populations that are with the rebels.

The Times is absolutely correct here. Cluster bombs are indefensible weapons. “Impossible to use precisely”, they are fiendishly good at targeting civilian populations. In a cruel twist, unexploded cluster bomblets often attract the interest of children, meaning they can go on killing and maiming innocents for decades after being dropped. 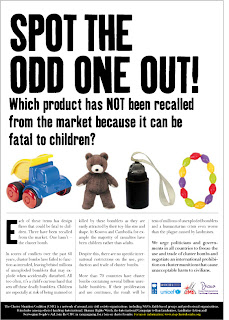 So I wholeheartedly agree that the use of cluster bombs against civilian populations reveals the Syrian government to be moral monsters. Then again, I am reminded of this passage I read in a Glenn Greenwald column last night:

Monday was the three-year anniversary of President Obama’s cruise missile and cluster-bomb attack on al-Majala in Southern Yemen that ended the lives of 14 women and 21 children: one more child than was killed by the Newtown gunman.

More detail from the Telegraph story cited by Greenwald:

Photographs smuggled out to Amnesty International showed the remains of the payload, mid-body, aft-body and propulsion sections of a BGM-109D Tomahawk cruise missile, the study said. This kind of missile is designed to carry a payload of 166 cluster bomblets, and one of the photographs showed an unexploded BLU97 A/B bomblet.

Only American forces are known to hold such weapons. Its serial number was traced to the Kansas Army Ammunition Plant, with a date of September 1992.

The United States under a Nobel Peace Prize winning President has not only refused to sign an international treaty to ban cluster bombs, it works to undermine efforts to do so.

I am saddened to add that Canada is failing to ratify a treaty in the form that a previous government once helped negotiate and that it signed. It is undermining the treaty by passing bogus bills with ridiculous loopholes.

These are actions of duly elected officials, leaders that are facing no legal sanction nor even paying a discernable political price. Their actions shame and implicate me, and I believe they should shame us all.

My Mennonite homies have shown admirable moral leadership and action on cluster bombs for a long time. So I will try to live up to my heritage in an exceedingly modest way this holiday season. I am now represented by a Member of Parliament who is a member of the current government’s ruling party. I will be calling on her to address this country’s current position and actions.  If I am to find any solace in no longer being represented by a reliably anti-war MP, maybe it will be by making myself a new pen pal.