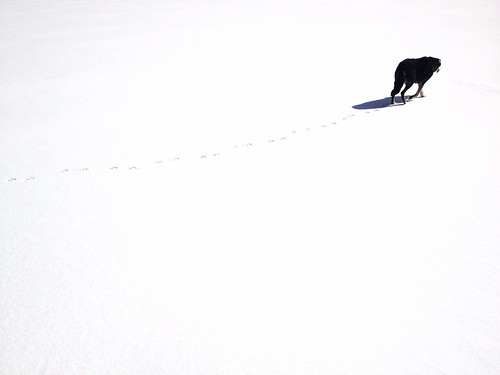 As spring increasingly asserts its will in a back-and-forth battle with winter, the temperature swings are creating wild effects here at Paul Lake. A couple weeks back, a long stretch of very warm temperatures had melted an inch of water on top of the lake’s ice sheet. A quick plunge in temperatures, unusual in that it was not accompanied by snowfall, briefly made the surface perfect for ice skating — we could go from one side of the lake to the other. 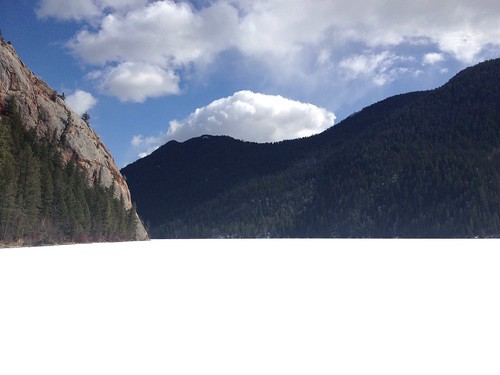 More thaw earlier this week, then some freezing and a bit of snow had the lake looking like an unspoiled expanse of whiteness this morning, I took the dog out to wander in the bright sunshine and the reflected whiteout below our feet. 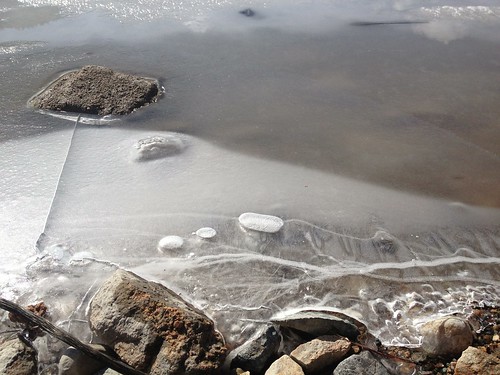 The sounds emanating from the lake as the temperatures rise and fall are haunting and unearthly. I can’t properly describe the moans coming from the depths beneath the ice and snow. Whale song… the echoes of far-away high-altitude jets… certain flavours of electronic music… On the coastline, where the ice has melted a bit along the rocks, the strongest groans are followed by bursts of water pulsating out from under the freeze, sometimes so violently the ice cracks and breaks apart… a dissonant drum beat tracking the synth riff.

The sounds are muffled by the ice and the snow, so my attempts to record them with my phone produced underwhelming results. Thankfully, others have taken this task on more seriously. This recording isn’t quite what we’ve been hearing, but captures a certain effect. 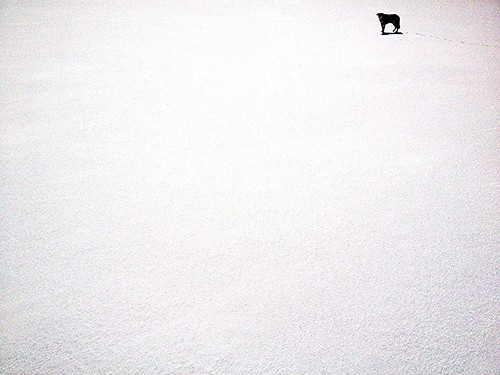 Apparently this phenomenon is known as dispersion:

Frozen lakes are known to give off most noise during major fluctuations in temperature: the ice expands or contracts, and the resulting tension in the ice causes cracks to appear. Due to the changes in temperature, the hours of morning and evening are usually the best times to hear these sounds. In my experience, thin ice is especially interesting for acoustic phenomena; it is more elastic and sounds are propagated better across the surface. Snowfall, on the other hand, has a muffling effect and the sound can only travel to a limited extent. The ice sheet acts as a huge membrane across which the cracking and popping sounds spread. Underwater microphones proved especially well-suited for these recordings: in a small hole drilled close beneath the surface of the water, the sounds emitted by the body of ice carry particularly well. The most striking thing about these recordings is the synthetic-sounding descending tones caused by the phenomenon of the dispersion of sound waves. The high frequencies of the popping and cracking noises are transmitted faster by the ice than the deeper frequencies, which reach the listener with a time lag as glissandi sinking to almost bottomless depths.

Some of the most unsettling sounds today are the deep and powerful cracks under my feet as I walk. A single step cracking a spine thirty feet long. If anything, the experience of walking on the lake is more powerful at night, deep dark silence under a canopy of stars. I doubt I will feel peaceful walking out onto the lake alone tonight.