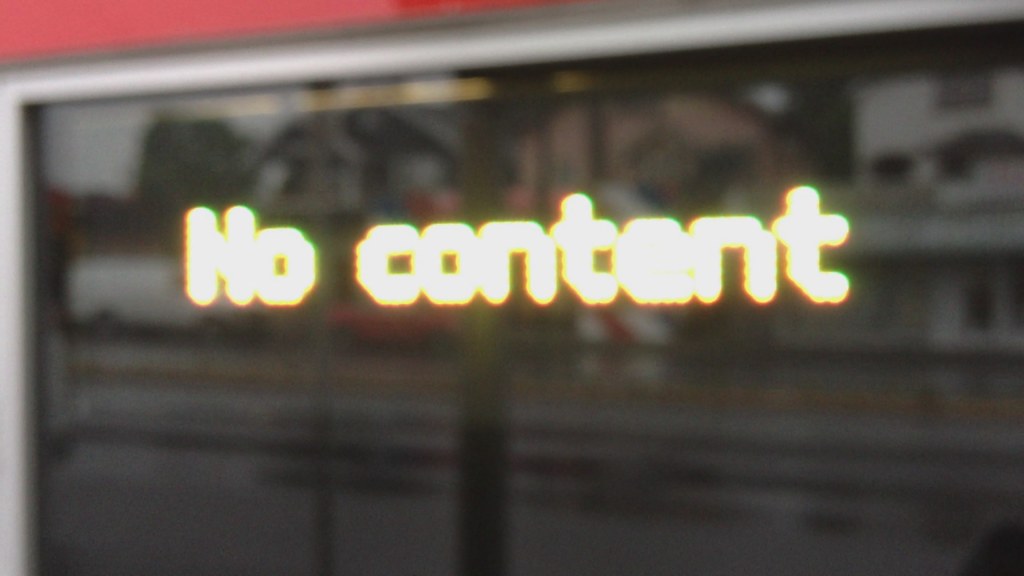 Let’s create as much art and expression of thought as we possibly can and send it out as widely as we can. Let’s listen just as widely. Let’s share consciousness and conscience every chance we get.

Help me to help myself as I try, likely in vain, never to refer to or think about these essential human acts as mere “content”. I suspect part of what increasingly creeps me out about this field is how much talk of TheFuture is about models, strategic partnerships, branding, platforms and how the ostensible purpose for all this activity gets lumped together as content, or data. An afterthought at best.

It’s easy to sneer off David Lowery’s much-cited Meet The New Boss, Worse Than The Old Boss? as sour nostalgia from a bygone age. But we are well into our second decade of the great digital cultural disruption, we can see who the winners are. Lowery’s characterization of the new boss may be bitter caricature, but it captures something:

Taking no risk and paying nothing to the content creators is built into the collective psyche of the Tech industry. They do not value content. They only see THEIR services as valuable. They are the Masters of the Universe. They bring all that is good. Content magically appears on their blessed networks.

I’m using this language for good reason. There is a quasi religious tone to many tech convention speeches and press releases. What other industry constantly professes utopian visions for all humanity? What other industry would dare proclaim they were liberating artists? Students? Workers? What other industry thinks they are mystical shaman “Let’s send our magic objects, our laptops to poor children in third world countries”. What other industry genuinely believes they (and only they) possess the lapis philosophorum? They have even created their own God. A Superhuman intelligence that they (naturally) have created. The singularity. Their egos know no bounds.

Not only is the New Boss worse than the Old Boss. The New Boss creeps me out.

Fast times make for exciting times. It’s oddly intoxicating and at times disorienting to see the concerns of our usually ignored corner of the ed tech universe suddenly appearing in the most prominent sections of the big newspapers. And in the middle of Eben Moglen’s recent talk Innovation under Austerity, I was surprised to hear how prominently the disintermediation of education figured in his broader argument concerning freedom and the web. Moglen sees higher education at a crucial crossroads, with one potential outcome in a for-profit, closed-software, highly-controlled googlized future, or another that embodies openness in principle and practice.

I have been thinking a lot about disintermediation in education since I listened to Moglen’s talk, wondering exactly which intermediary in the supply chain is seen as superfluous (and wondering who is likely to see research and learning as just another “supply chain”). But I will leave that for another post. George Siemens makes some dead-on observations in his open letter to Canadian universities:

Higher education leaders, globally, have few excuses to justify feeble responses. I’m concerned that the ossification of higher education institutions, and a complete failure to build capacity for adaptation, will produce a bonanza for educational technology startups at the expense of the university’s role in society. The current generation of leaders are overseeing the large-scale dismantling of the public university. Piecemeal outsourcing, growing prominence of adjuncts, and tendering key functions of the university (online course development), are creating a context where the university will no longer be able to direct its own fate.

I fervently believe that the work George and other true innovators have done in open course delivery deserves more recognition, support and room to develop. That said, I’m disturbed at how MOOCs seem to be such a dominant theme in proposals for reform, not only in George’s open letter but in so much of the discourse these days. For one thing, the MOOCs we read about in the papers are not open. This is not merely a concern of ideological purity. As Kate Bowles astutely observes, so much of what is deemed revolution just seems like TV. We need to think in bigger, broader ways.

As Timothy Burke argues in shrieking yet persuasive terms, the focus on venture-capitalized MOOCs distracts us from better-developed strategies that promise to do more to reduce the costs and increase the reach of higher education: open platforms and open access. Take a look at the impact that a small school like the University of Mary Washington can have with its open platform. Think about the efficiencies an open source, searchable, syndicated, collaborative authoring system can provide when publishing to multiple environments. And really, if higher education can’t get its IP in order, recognizing that it authors, reviews and consumes research that can be distributed effectively by proven open access models… well, maybe it deserves to have its role in society questioned.

Marshall McLuhan is famous for arguing that the medium is the message. Blaine Cook suggested in his Northern Voice keynote that the internet is remarkable because it is a medium for creating mediums. The significance of free, open media environments that promote reflective, critical inquiry cannot be overstated. If we are indeed in the midst of a revolution in how knowledge is constructed, articulated and disseminated, then it is of vital importance that higher education institutions embrace their traditional mandate as stewards of scholarly values.

I often tilt to doom-mongering in this space, usually because I despair at what I see as missed opportunities. I remain convinced that the web represents an unparalleled opportunity to create a world with more diversity, more art, more dynamic intellectual energy, more enlightened discourse, more urgent grappling with problems we desperately need to solve. That world won’t happen if we think of these activities as “content”. We still haven’t put a price on dreams.