This film is less than six minutes long. It’s very well made, with a dark hypnotic beauty. I barely made it through. Filmmaker Josh Begley captures the 280 (reported) concussions in this year’s NFL season.

Made as a collaboration between Field of Vision and The Intercept. I also recommend a companion podcast conversation between Begley, Shaun King and NFL veteran Donte Stallworth that illuminates not only the sorry state of player safety, but explores the strange and intense political symbolism the game carries in the age of Kaepernick, Trump, and so much else… Very much worth listening, even if you don’t follow the game.

More on “What a lifetime of football can do to the human brain”, which notes that the degenerative brain condition chronic traumatic encephalopathy (CTE) may not only be caused by concussions, but the normal and repeated collisions that do not cause immediate injury. The postmortem studies of former player’s brains suggest the syndrome may be very widespread. The game frequently leaves its stars broken in body, and since NFL contracts are not guaranteed, a single hit can leave a player in utter ruin. For a variety of reasons, those gaudy salaries frequently do not provide financial security. 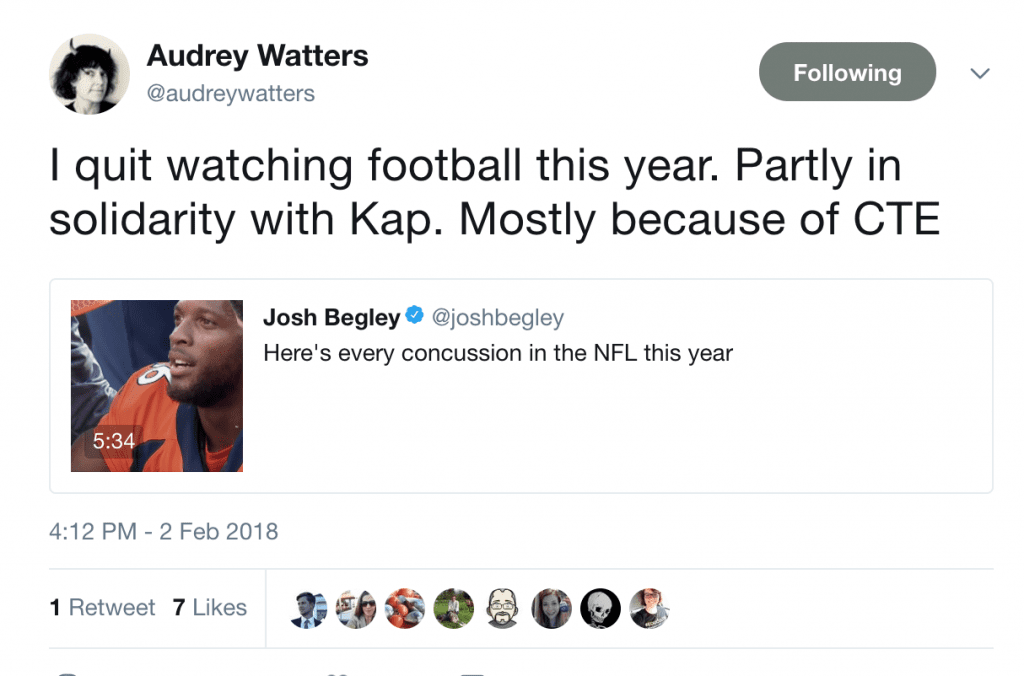 “Downward Spiral” by David Roth, offers a detailed rumination of how the sickening machinations of professional football and contemporary political life are expressions of the same dynamics of money, power and race.

The NFL is financially healthy and also pretty luridly out of its mind, increasingly given to grandiose delusion and stubborn denial and spasms of executive sadism. And lately, it’s declining—in ways that are obvious for even casual viewers and evident during an average Sunday’s slate of games and in ways that the league might not fully feel for generations.

It’s America’s game all right, and if the NFL is sick, if it is even perhaps dying, it is for the most American of reasons—because it is increasingly ragged and rotten with corruption, and because it can’t quite come up with any other way that it would rather be.

…In the ways that blank greed and unaccountability have warped and weakened both the league and the sport itself, we can see a funhouse refraction of what corruption does to societies. In both cases, rich men’s self-serving smallness and single-minded dedication to their own narrow interests have put a broader future at direct and dire risk. In both the NFL and the similarly beleaguered American republic, change has never seemed more urgent or necessary, or more difficult to bring to pass. And in both venues of bloated, wobbling patriotic spectacle, the last and greatest reason for hope is the certainty that a present that so poorly serves so many cannot also be the future.

Enjoy the big game everyone!

2 thoughts on “It’s the Abject Super Bowl Spectacular! Picks and prop bets! (“What time does the Super Bowl start?”)”