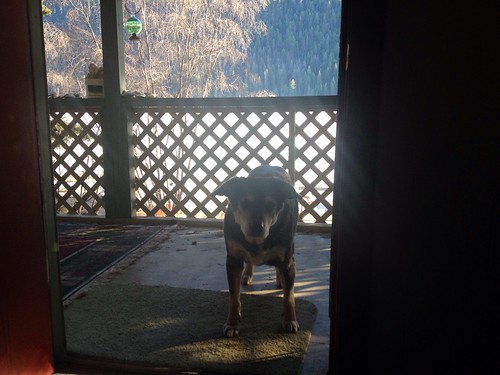 I’ve had the privilege of knowing many tireless champions of open education, open access, open society and open culture. But when it comes to flat-out relentless activism in the service of open, I have never encountered anyone who pursues it with the single-minded and uncompromising dedication displayed by Dexter the dogster.

Dexter’s focus is quite literally in the “open as in doors” sense. If he sees a door that is closed, he will act to see that it is opened. It can be a bedroom door, a bathroom door, but especially a door between an indoor and outdoor space. Like the one that divides the living room from our deck. If he is on the inside of that door, he will demand it be opened so he can go out. If the door is then closed behind him, he will immediately insist it be re-opened so he can come back in. He can effortlessly maintain the in-and-out-and-back-in cycle every minute or so. For hours, if need be.

His direct action technique is simple and unstoppable. When provoked by the offense of confinement or exclusion, he stands at the door, firmly, calmly, implacably strike-scratching, arrhythmically, every ten to fifteen seconds. He never leaves a mark, but the sounds over time cumulatively unhinge the authoritarian mind. His advocacy for open access is his life, in practice at all hours day or night. His will to open always prevails.

I do not relish being an arbiter, gatekeeper and force of enclosure in our home. I can understand and even admire Dexter’s unwavering commitment to the open movement. But faced with the unforgiving reality of a Canadian winter, I cannot indulge his idealistic dreams. However, as winter gives way to spring, as the sun begins to shine and the breezes carry hints of warmth, Dexter’s relentless civil disobedience wears me down. I put on an extra sweater. I open the door to the deck. I leave it open. For a moment, Dexter does not know if his victory will be enduring, or whether I am making some devious marketing ploy in the name of openwashing. So he rests his weary aging bones near the now-open door, putting his body on the line, focusing his vigilance on never allowing that door to be closed again. At least, not before mealtime.

What has Dexter’s activism for open taught me? The power of persistence, of unyielding resistance, of being the change you want to see in the world. He has taught me that the most uncompromising zealot may persist in highly disruptive agitation without punishment if they possess a gentle nature, unbearably sweet eyes, and give sloppy kisses to anyone not put off by dog breath.

As winter turns to spring, as the door remains propped open, I salute you Dexter, and ponder what more you have to teach me. 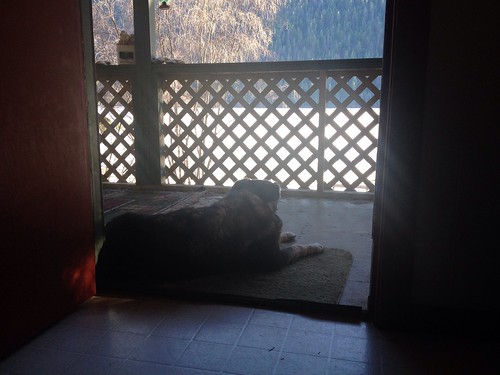 8 thoughts on “A champion of open, triumphant”