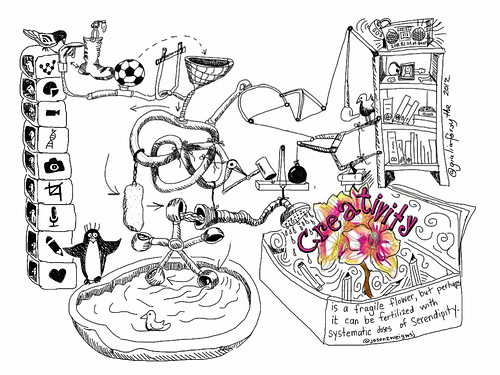 Sometimes encouraging developments sneak up on you. I’ve done my share of hand-wringing lately about the apparently dwindling fortunes of syndication. But a few very promising items have pulsed through my trailing-edge feedreader lately.

From Gardner Campbell, this nugget of recursive wisdom:

Web syndication really does think about the web as a vast database, and each site on the web as potentially a dynamic, curated representation or slice of that database. But the database is itself constantly refreshed because the web that feeds the database of the web is the web of human curiosity, expression, and meaning-making.

Also, I’ll be following the impressive and exciting work by David Wiley and Bill Fitzgerald on transclusion and syndication that motivates the Candela WordPress work, and the super-cool wiki federated reuse thinking and building from Michael Caulfield. These are all welcome reminders that the state of the field is not as dire as I sometimes tend to think.

I thought I’d share an example of out-of-the-box syndication and transclusion that’s being adopted more or less spontaneously by students here at Thompson Rivers University. We have been slowly rolling out our own instance of MediaWiki, with a small but growing cohort of early adopters that includes a course on legal perspectives. This is an interesting group, there are a large number of students divided into more than twenty groups to develop public pages analyzing historic Canadian cases from a variety of legal schools of thought. It’s been fascinating to see how some groups have put more effort than others to understand what the system can do in terms of presenting their work with things like layout commands, and to observe how particularly effective techniques are noticed and re-adopted by other groups as the semester proceeds.

One very cool feature of MediaWiki that the students have discovered and are using relates to syndication. If you look at this page, you will see the students have used an image of Ronald Dworkin to enhance their text. If you click through to the image, you will see that it is drawn from the Wikimedia Commons, and the TRU wiki media file has remarkably detailed metadata outlining where the image came from, the licensing of the image, and where else on the TRU wiki the image is being used. In other words, pretty exemplary reuse of a public knowledge resource.

What’s exciting is how easy it was for the students to do this. If you go to the source media file page on the Wikimedia Commons, you’ll see a number of reuse links on the sidebar. If you click “Use this file on a wiki”, you are provided with the basic MediaWiki markup, ready to use on your own page. In this case – [[File:RonaldDworkin.jpg|thumb|RonaldDworkin]]

What’s so cool is that once you add this code to our page, MediaWiki InstantCommons then adds this file into the TRU wiki’s media library, so the file is only downloaded from the Commons once, and there is a local copy with our own metadata and usage tracking on our system. (FYI, there is also a WordPress plugin with similar functionality.)

And again, this was functionality that students more or less figured out on their own, and a technique most of the Legal Perspectives groups are using to incorporate copyright-compliant images into their public work. The Wikimedia Commons is one of the most impressive sources of open media available to us, and with projects like this to harvest more high-quality learning media for the Commons, its future seems bright.

Open tools, open media, and syndication. Observable open content reuse in the TRU student population. Nice to end the week with some love-mongering for once.