Way overdue as a pointer, but a couple weeks back Adrian Johns paid a visit to UBC, giving a very rich talk entitled “The Intellectual Property Defense Industry and the Crisis of Information”. Dr. Johns’ abstract sums it up quite well:

With Dr. Johns’ gracious permission, I recorded audio of his talk, and I highly recommend you give it a listen.

As mentioned in an earlier blog post, I’ve been fitfully reading Johns’ book Piracy. It’s a meticulous, provocative read, and it’s hard not to marvel at the extent of Johns’ research and erudition. 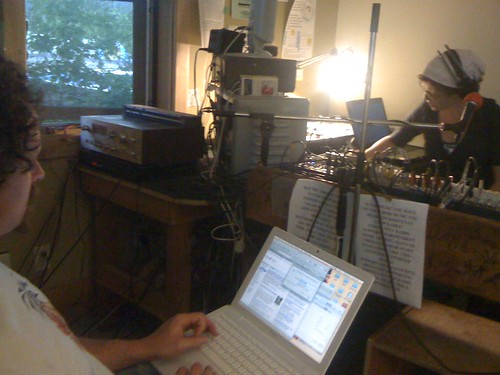 I’ve especially enjoyed the chapters detailing the early days of radio in Great Britain. It was an era where a medium developed via wild and decentralised experimentation gradually came under the control of state and corporate interests. And it was a period where the act of merely receiving or listening to a signal came to be characterised as piracy. It was the largely individual “experimenters” who invented and refined the technology that came to be known as radio, but the status of the unregulated experimenter came to be seen as one of the greatest threats to the nascent British Broadcasting Corporation and the industry in general.

The parallels with the evolution of the internet are hard to miss, of course, and I increasingly fear that the future of the web may prove to be as controlled, top-down and generally sterile as most radio is today. There are some counter-currents at work, and during the formal discussion of #ds106radio at the Open Education Conference last week (video of that session here), I could not resist but conclude (in defiance of our session moderator/timekeeper’s throat-slitting gestures) with a lightly twisted reading of a passage from Johns’ book, because I think it applies quite well to #ds106radio and (I hope) to the web in general:

There was no way to tell who was or was not an experimenter, nor to count how many there were. Or, to put it another way, everyone was an experimenter, at least potentially. In that case, radio took on a different role. It might be the trigger that could turn potential into actuality, taking dormant talents and enticing them into use. “The listener may perhaps become an experimenter… the experimenter may possibly become an inventor.” … It was beyond the capabilities of bureaucratic assessment systems. 7 thoughts on “Participation as Piracy”