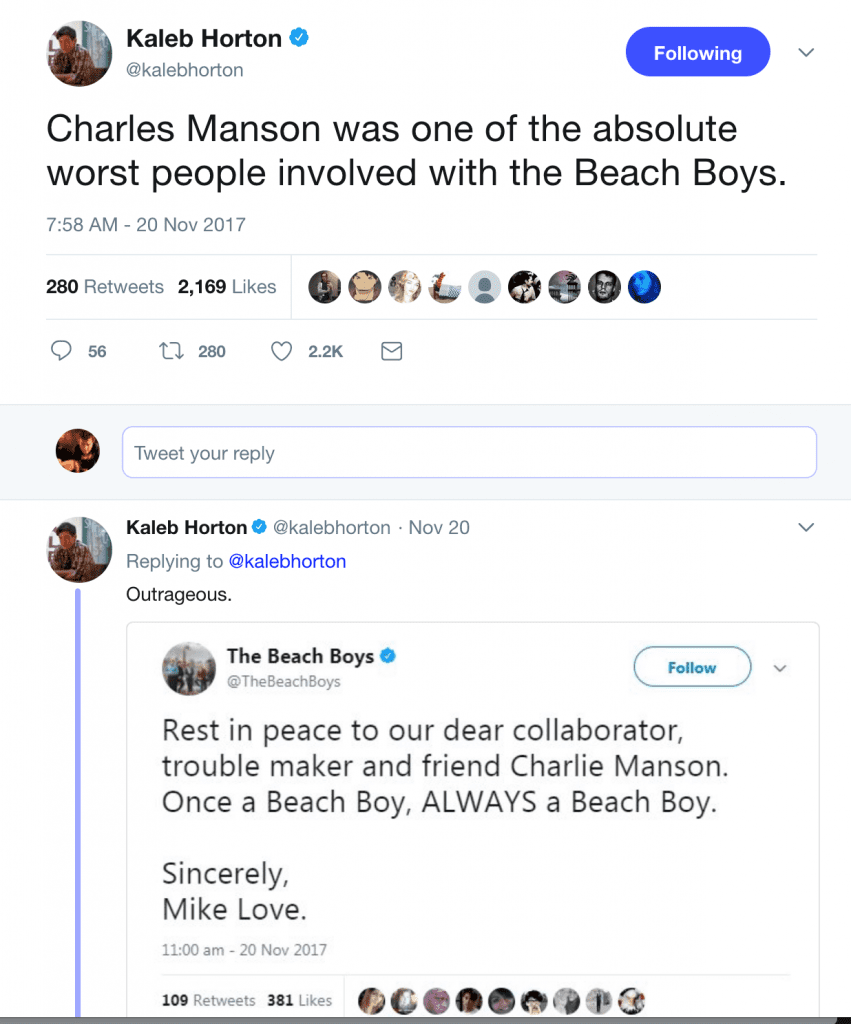 They hit me as funny enough to check out Horton’s The Last Exit Show podcast, and I was not disappointed that the most recent episode opened with a monologue that carried on the Mike Love bashing with a certain élan. Made my day. That lured me on a few dives into the LES archives, which I enjoyed enough to throw a few bucks at his Patreon page, and though I live in Canada set me off on rambles through desert highway diners and dusty jukeboxes of the mind, a few of which are below…

Thing is, Horton’s Tweet wasn’t even the sickest Mike Love burn on Twitter to be prompted by Manson’s death. 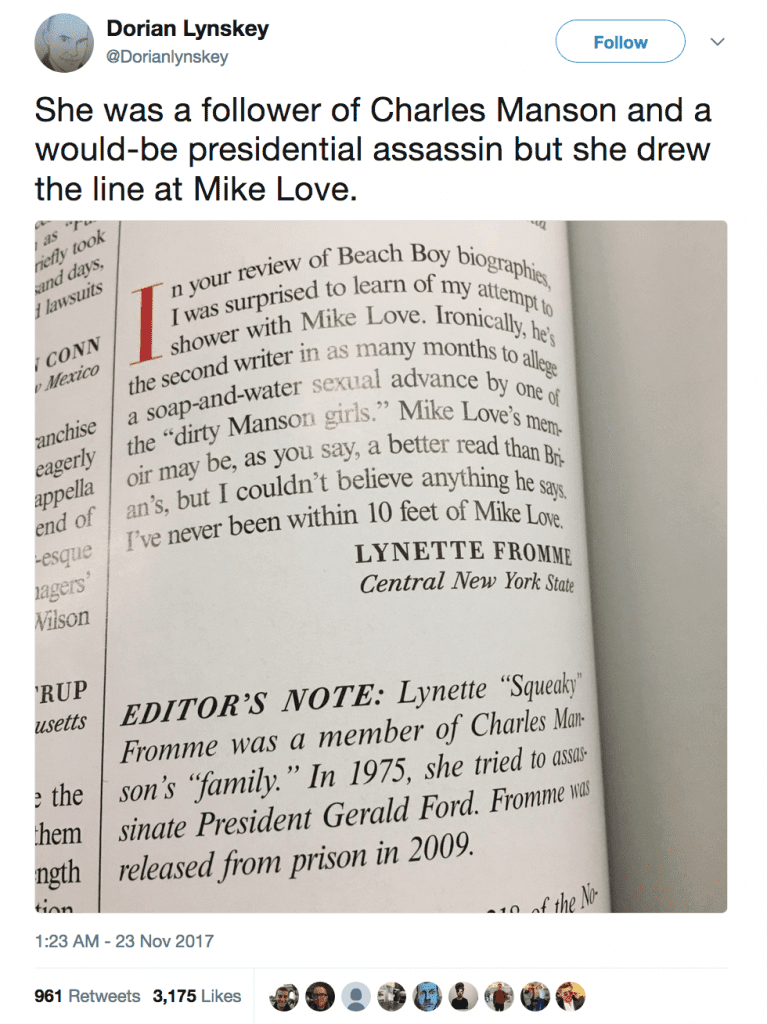 If you have no idea why people would say such things, maybe you shouldn’t listen to Love’s moronic commentary trashing Brian Wilson while he was working on SMiLE, or endure Love’s jaw-dropping acceptance speech at the Rock and Roll Hall of Fame. Nor should you watch this:

Horton’s suggestion that Charles Manson may not necessarily be the worst person to enter the Beach Boys’ orbit goes beyond Mike Love of course. Showbiz Dad Murray Wilson was an all-time shitbag. They jam with the guy from Sugar Ray (“that’s Mike Love!“) and John Stamos. And then there is Eugene Landy, the parasitic “therapist” who attached himself to Brian Wilson and his songwriting publishing rights like a Manitoban lake leech. He described his self-invented methodology of “milieu therapy” in the Handbook of Innovative Psychotherapies with charming modesty:

Of course, reading that, I could not help but see the influence that Eugene Landy must have had on Dr Hal Raglan and Dr Jim Groom. Groom’s aggressive and controversial program of treatment for me — and the all-hours-total-access social media exposure — has resulted in widely-publicized repudiations from all the psychology ethics bodies, as well as the Amazing Kreskin. My journey to heal has been a relentless yet satisfying ordeal that Groom describes as “a morbid kind of anti-therapy”, dedicated with fanatic intensity to “explore the limits of manhood“:

According to songwriter P. F. Sloan, Landy took advantage of Sloan’s disappearance and claimed at one point to be the real P. F. Sloan. He explains that it was an attempt by Landy to gain credibility and appease members of the medical community who were questioning why Landy felt that he was an appropriate songwriting collaborator for Wilson.

I’d heard the name “P.F. Sloan“, but could not place it… and what was that about his “disappearance”? Turns out Sloan was the songwriter of Barry McGuire’s “Eve of Destruction” and Johnny Rivers’ “Secret Agent Man”, among other things… and yeah… he drifted away “for a good 20, maybe 25 years. …Catatonia for a long time.” But then he came back… His 2006 album Sailover is on Spotify, and stands up as a fine slab of Americana.

Lingering on some of the more twisted elements of sixties counterculture got me doing some truly stupid things online… Like watching the entirety of The American Dreamer (which is currently streaming), a documentary supposedly of Dennis Hopper editing his incomprehensible-on-any-level The Last Movie and generally acting like an epic loathsome jackass. Which might begin to explain why I got thinking more about the Beach Boys / Charles Manson connections, which led me to the You Must Remember This podcast, a stylish and knowledgeable descent into the darker forgotten stories of old Hollywood. Karina Longworth describes her project as “a heavily-researched work of creative nonfiction …conflicting reports, conscious and unconscious mythologizing and institutionalized spin, the truth is murky at best.” A couple years back, Longworth did a twelve part series on the Manson murders and milieu… (which she recently collected as a Spotify playlist).

Longworth dedicated an episode to Manson’s relationship with Dennis Wilson and the Beach Boys, of course. But the piece that interested me most was a relatively tangential one focused on Manson henchman Bobby Beausoleil and his time with underground filmmaker Kenneth Anger (still alive!). I learned that Beausoleil led a group inspired by Sun Ra (!) called The Orkustra. He was also in a band with Arthur Lee called The Grass Roots, but not the famous The Grass Roots that recorded “Let’s Live for Today” and “Midnight Confessions”, that was the incarnation of The Grass Roots that was led by a songwriter named… P.F. Sloan(!). Beausoleil and Lee were a different The Grass Roots, they were the one that eventually changed their name to Love, and that became something that some people think was one of the great psychedelic bands ever… Now, I’ve enjoyed a couple of Love songs at the perfect moment when I was in the right mood… But I have never understood why people make such a big deal out of Forever Changes. I’ve tried.

You may have noticed that a secret theme of this post is pursuing digression. If I had the courage of my convictions I would plunge headlong into the Wikipedia disambiguation options for Love and keep typing until I collapsed. Or at least go back to Mike Love for that matter. I have so much more to say about him. 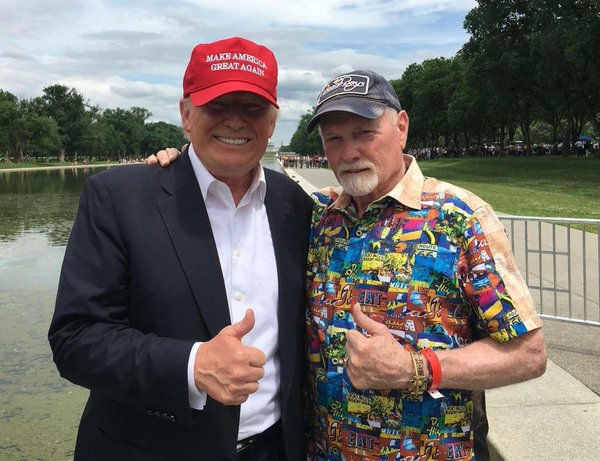 But as my 24-hour therapist constantly reminds me, I can be a real fucking coward. And as I write this, it is after midnight, and in the early morning I have learning technology to administrate, staff to direct, plans to service, budgets to submit. So I will cut my losses and leave on a few downbeat musical notes…

One of the things that hooked me to Kaleb Horton’s podcast are the frequent musical references. He’s from Bakersfield, California, where so much classic country music is grounded. There are Merle Haggard and Buck Owens of course, but seems to me that the “Bakersfield sound” can apply to a lot of the best country and western even if it came from somewhere else. A few tracks Horton has turned me onto…

This James McMurty song has some personal memories for me too… A few of us at the ELI conference in Austin a decade or so back saw McMurty at the Continental Club (Jon Dee Graham opened), it was quite a night.

What was that I said about going to a job tomorrow?

What I plan to do now is jump in the car and head south, and drive the backroads and eat at the diners and try to hear the soon-to-be-forgotten stories forever…