As we were preparing from our homes on opposite sides of Canada to head off for New York City, my buddy Grant Potter sent me this video by The Town Heroes:

It turned out to be almost prophetic, as much of my week was spent with Grant and we gawked around NYC like a similar couple of Canuckleheads — we even had some friendly banter with a dude dressed in a Spiderman suit one night. Some of the adventures we had: 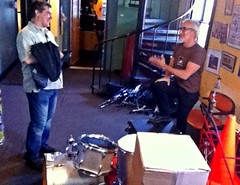 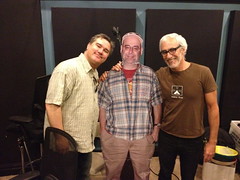 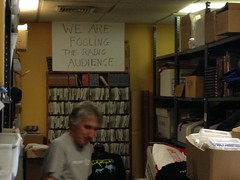 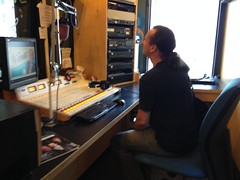 After more than a decade of dedicated fandom, I finally made the pilgrimage to the WFMU studios, where we got a guided tour from Station Manager Ken Freedman himself. (Kind of a big deal.) While we were there, we also had a good long chat with Jason Sigal, a former Director of the Free Music Archive, and a pretty damned cool open educator, involved with the impressive Beam Center among other things. I recorded some really interesting discussions with Ken and Jason that I hope to pull out in future posts. 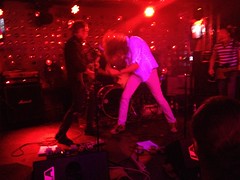 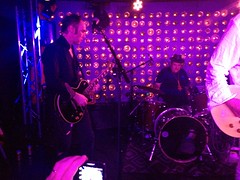 Grant sniffed out a show in Brooklyn headlined by Death of Samantha, a just-reformed band featuring Doug Gillard, who has been one of my favorite guitar players since I first encountered him with Guided by Voices. He was kind enough to sign the vinyl I bought at the show, and endured my gushing with grace. The opening acts included Lame Drivers (featuring the aforementioned Jason Sigal on guitar, which was a fun surprise), and a jokes/guitar-shredding act from Dave Hill, whose WFMU radio show is a good listen. We even had Jon Beasley-Murray from back home along with us that night.

A notable part of the evening… among the audience of a couple hundred people was J. Mascis (of Dinosaur Jr. and much else). I presume he was there in part because Death of Samantha singer John Petkovic performs with Mascis in the band Sweet Apple (whose latest album I have been digging). What I found remarkable was how Mascis could watch the show in the crowd completely unbothered, nobody bugged him for an autograph or a selfie (though a couple awestruck Canadians were thinking about doing it). 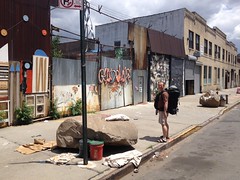 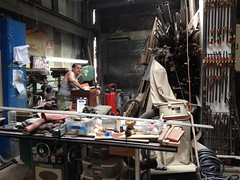 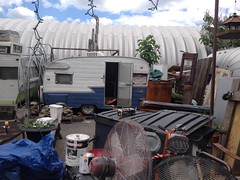 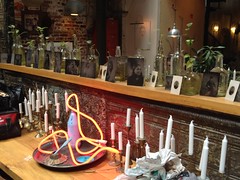 Mr. Potter also snagged memorable digs for us to crash in Brooklyn, an artists’ space with a yard filled with materials for sculptures and other mixed media work… guest trailers intermingled. Really interesting people living life in a vivid way. 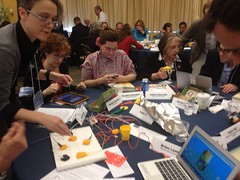 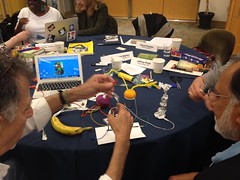 Grant was just one of the many people who made the week a non-stop series of peak experiences. The Symposium on Communication and Communication-Intensive Instruction presented by the Bernard L. Schwartz Communication Institute at CUNY’s Baruch College was a truly inspiring gathering of gifted and passionate people. One of the things I found fascinating was that the attendees were drawn from academia and from a variety of other areas, including a substantial contingent from the business community. As a result the discourse had a more diverse feel that I found refreshing. It helped that there were so many long-admired people in the room: Barbara Ganley, Alan Levine, Luke Waltzer, among others. I finally got to meet Matt Gold, who was every bit as smart and cool as I always thought he would be. I was blown away by the overall calibre of intelligence and talent in the room. I honestly can’t begin to namecheck all the brilliant new people I met, but I hope at least some of these connections persist. It felt very cool to be there.

danah boyd delivered a thoughtful and passionate opening keynote based on her book It’s Complicated, and heaps more compelling discussion followed in roundtables and plenaries. But I really dug the closing activity, led by Grant, Mikhail Gershovich and Erica Kaufman using MaKey MaKey kits. It was interesting to see so many people pulled out of their comfort zones: confused, disturbed, then intrigued, then excited and finally reflective. 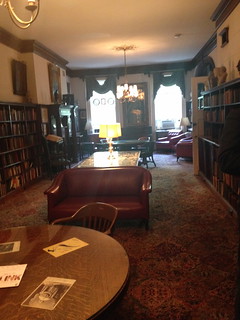 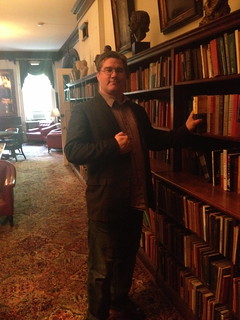 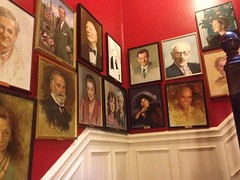 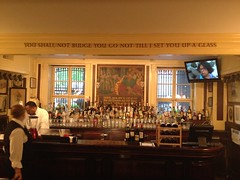 I’d be remiss not to mention the follow-up dinner at the venerable Players Club, a fine old establishment with a killer bar downstairs inhabited by (I’m guessing successful) musical actors singing standards while they shot pool. Suffice to say it was the sort of place that under normal circumstance wouldn’t let me inside even if I got it in my fool head to try.

Sincere thanks to Suzanne Epstein and all the other organizers and hosts for such an enriching and enjoyable event. 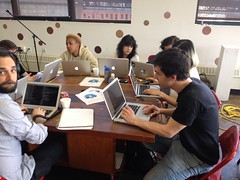 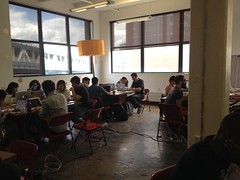 Saturday afternoon we made a stop at an Audio Visualization Hackathon, part of a monthly series of Music Hackathons in NYC. This was yet another piece of goodness that Jason Sigal turned us on to. Most of the people there were working off of the Web Audio API, and I have to admit that most of what was being done was way over my head in all but the most basic respects. (Grant did better.) But I felt heartened and inspired that so many bright and hip young people would work so hard all of Saturday just to build cool open applications to share with the world. For the princely sum of coffee and pizza. 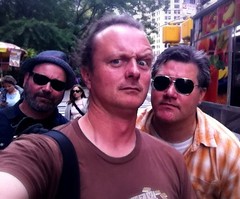 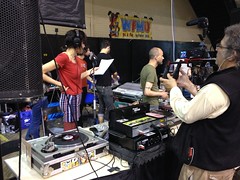 We then hooked up with Mikhail, who was a fantastic host and tour guide throughout the week (even though he now resides in LA) for another dose of WFMU goodness, its annual Record Fair. Snagged a few choice slabs of vinyl (restrained by budget and the realization I would need to carry LPs home by hand), saw some good bands, met more WFMU DJs and generally just soaked up the whole scene. 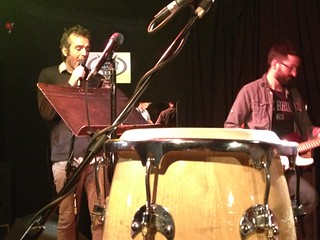 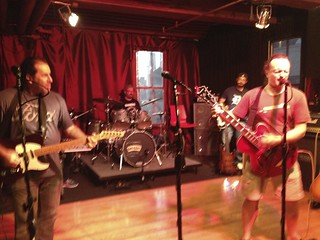 And if the week hadn’t packed in enough rocking good times, Luke arranged for us to have a jam space in the most groovy Smash Studios, where some of the aforementioned people were joined by Boone Gorges (who had earlier in the week schooled me on open collaboration tools, and followed it with a walking tour of Manhattan), Michael Branson Smith, and Jeff Whelan for an insanely fun night of feedback, crashes, screams and laughter. Four hours felt like a few minutes, as it always seems to when highly amplified and mostly faked tunes are involved.

What happened after that in the wee hours in Times Square and the Lower East Side is perhaps best left in Manhattan.

I got another day in the area on Sunday, staying with my old friends Dave and Eva in a leafy quiet suburb, enjoying the breezy porch, restorative hospitality, and rich conversation.

Again, I shudder to think about all the people I am failing to acknowledge here, and this account only begins to capture the many fine and I hope unforgettable moments I carry with me. When I started this post, I planned to finish it with LCD Soundsystem’s “New York, I Love You but You’re Bringing Me Down”. But thinking back over the visit, and the many people who made it so wonderful, this other LCD track feels more appropriate: